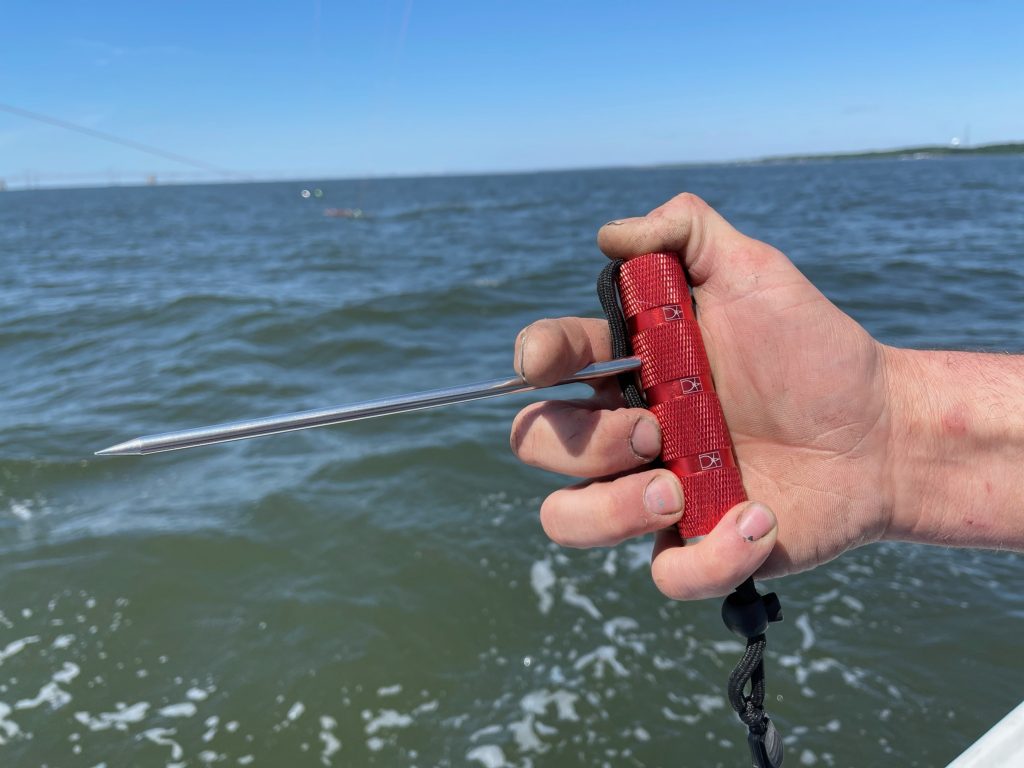 A Scientific Guide to Ike Jime

Ike jime requires both skill and practice with live fish.  But it also requires proper equipment.

At a minimum, you will need a sharpened brain spike that can easily puncture a fish’s skull, a sharp knife or snips, and ice.  More advanced and commercial practitioners incorporate the use of a shinkei jime wire (or other mechanism) to destroy the fish’s spinal cord.

Species, size, and circumstance will dictate appropriate and safe handling of the fish and your equipment.  In some cases, you may have access to a flat working surface.  In others, you may have only a low gunwale or the deck of a boat.  In still others, you may be chest deep in the surf or even submerged underwater entirely.  Species, size, and circumstance may require modifications, but the core principles remain the same:  Minimize stress, inhibit bacterial growth, and maximize intracellular integrity.

A fish cannot breathe out of water, and thus it begins to suffocate once it is removed from water.  Suffocation causes stress, which causes a flood of adrenaline into the muscle tissue and cortisol into the bloodstream.  Suffocation also causes the fish to thrash while struggling to “escape” the experience of suffocation.  Trashing is the result of forceful muscle contractions that utilize a great deal of energy — exercise.  The longer the exercising continues, the longer the period of lactic acid accumulation in its muscles, and the higher the fish’s core body temperature will climb.

Excess lactic acid and adrenaline produce off-flavors in the resulting meat.  Left unmitigated, the biochemistry of the carcass will be therefore fundamentally and permanently contaminated.  By preventing the fish’s ability to experience the stress, however, these negative biochemical, biophysical, and hormonal consequences will be minimized.

Using a brain spike in one hand and the fish in the other, plunge the point of the spike into the live fish’s brain cavity.  A successful kill will cause the fish to seize, flaring its mouth, gill plate, and dorsal fins.  The fish, now lacking brain function, can no longer experience the stress of suffocation and its muscle tissue will be protected.

Bacteria is the source of off-smells and decomposition.  Left to proliferate, bacterial growth will eventually overwhelm the carcass from the inside out.  The rate of bacterial proliferation is controlled by temperature, and the availability of water and oxygen.  Because the lionshare of a fish’s bacterial load is contained in the blood and the gut cavity (removed later), you should remove as much blood as possible from the carcass early.

In the field, it is easy to utilize natural processes to facilitate blood removal.  The heart of a fish that was brain-spiked seconds before will still beat for up to several minutes thereafter.  Severing major arteries during this window of time utilizes the residual blood pressure from the still-beating heart to help pump the blood out of the fish’s body.

Using an appropriately sized knife or snips, cut the gill arches under the gill plate.  A cut to this site will allow the blood to flow out of the carcass freely and immediately.  If circumstances permit, make a second cut to the caudal artery in the tail.  Lay the fish flat and scrape away a few scales on the tail with the back of your knife to expose the skin.  Careful not to sever the tail entirely, cut deeply into the spine and sever the caudal artery that runs from head to tail along the belly side of the spine.  Cutting through the spine and the caudal artery without severing the tail completely requires practice and an appropriate blade. As discussed in greater detail below, cutting the tail in this way also exposes the neural canal.

This method of passive bleeding may be enhanced by submerging the fish into a tub of ambient-temperature water after making the arterial cuts described above.

A fish killed instantly will retain a great deal of energy in its muscle tissue — this the same cellular energy the fish would have used to thrash and flex during suffocation.  However, by preventing the fish from suffocating or otherwise experiencing such stress, these cellular energy reserves remain unspent.

Some of these energy reserves, however, will be spent by the muscle contractions that naturally occur even if a fish has been killed with a brain spike.  This is because the electrochemical impulses that still remain in the spinal cord, as opposed to the brain, may continue to fire.  Indeed, some fish, and especially large scombroids (tuna) or other carangids (jacks) will continue to buzz and flutter even if completely decapitated.  This can also be highly dangerous.

Shinkei jime is the destruction of the spinal cord that will minimize any and all involuntary muscle contractions that result from residual electrochemical firing in the spinal cord, and therefore preserves as much cellular energy as possible. Destroying the spinal cord effectively paralyzes the fish from any further movement, even after brain death. This optimizes the level of cellular energy available before the fish eventually enters a state of rigor mortis, which also extends the period before which rigor mortis will set in.

The spinal cord is a soft, fleshy cord that is housed inside a bony canal (i.e., the neural canal) running directly atop the (dorsal) side of the spine itself. The spinal cord connects the entire central nervous system of the fish, starting in the brain and ending in the tail, meaning that it spans the entire length of the spinal vertebrae.  The neural canal protects the delicate spinal cord from injury, and it ranges in size from mere millimeters in diameter to about 1cm in diameter for large fish.

Accessing the spinal cord requires some level of skeletal compromise. This can take place by creating an opening either in the brain cavity itself using a spike or introducing a break in the neural canal using a knife. Destroying the spinal cord and all of its functionality requires specialized tools.

Species, size, and circumstance will dictate the appropriate spinal destruction tool. At a minimum, the handler will need a wire or filament that is thin enough to insert into the neural canal, long enough to extend the entire length of the spinal cord, flexible enough to follow the natural contour of the fish’s spinal vertebrae, and strong enough to sufficiently destroy the spinal cord’s ability to fire. Once the wire is inserted, ream the neural canal with a back and forth motion. This will rupture the spinal cord and cause the fish to remain permanently motionless.

Cold temperatures inhibit or even halt bacterial proliferation altogether. Submerge the entire fish into an ice slurry after the fish has been bled and its spinal cord ruptured, taking care to ensure the fish’s body is aligned and straight. It is not enough to simply place one side of the fish atop a mound of ice or other fish, as this will cause uneven rates of cooling on the fish’s body and create unusual marks on the skin. A slurry, on the other hand, allows cold water to envelop all surfaces of the fish’s body evenly, and lowers the fish’s core body temperature quickly. This protects the cellular integrity of the connective muscle tissue during rigor mortis and ensures that the fish’s carcass remains pristine.

Stay In the Loop. 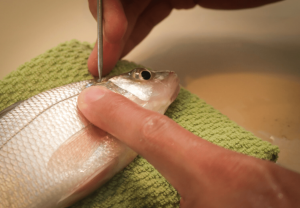 Ike jime takes some practice. Ike jime has its detractors. But ike jime is not a magic trick; rather ike jime is equal parts science 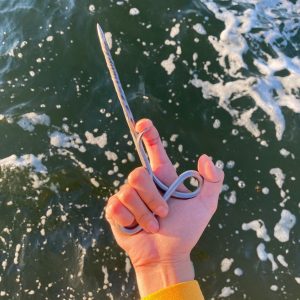 What Makes a Good Brain Spike? 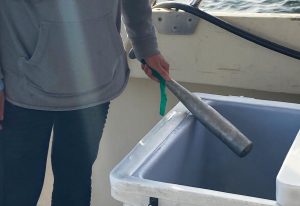